ACEL360 hosted a celebration event in its Reston office to acknowledge a milestone – the completion of its first 4-monthGovCon Accelerator Program. The first cohort comprised five companies, Karthik Consulting, ITCON, INDRASOFT, CONCEPT SOLUTIONS and CTIS. The GovCon Accelerator Program offered by ACEL360, in partnership with Wolf Den Associates, was envisioned to help small to mid-sized companies in the federal marketplace become more competitive in obtaining business by developing new competencies and employing targeted capture business development strategies to increase win rates. ACEL360 engaged experienced and qualified mentors to support its cohort members and by all accounts, this first Accelerator Program was a grand success. In addition to the cohort members, the event was attended by several mentors, Wolf Den CEO, Kevin Robbins and the ACEL360 staff led by its CEO, Sanjay Puri and President, Bill Yarnoff. 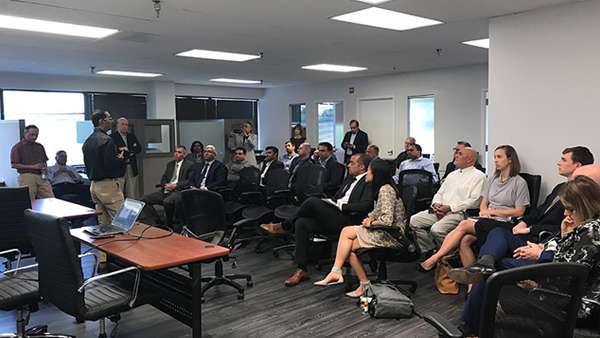 The event started with introductory remarks by Sanjay Puri and Bill Yarnoff and was followed by mock presentations by the companies to the audience making a pitch to an imaginary client about their capabilities and proposed engagement. The audience gave each presenter constructive feedback about tightening the pitch and getting their point across in a more crisp and effective way. Feedback included using fewer slides, fewer words on each slide, telling a story to bring the presentation into context, being relaxed during the presentation and keeping the message on point by presenting it first and concluding with it in the presentation. The air was serious but congenial with the cohort members clearly acknowledging the value they attained from participating in the ACEL360 4-month Accelerator Program. The event ended with final remarks by Bill Yarnoff, President of ACEL360 and Kevin Robbins, the CEO of Wolf Den Associates, asking in turn, for feedback from the cohort members and mentors in attendance about how the Accelerator Program can be tweaked to better serve its participants. One such change contemplated by ACEL360 is to offer the program as a 3-month program in the next round.

Then the champagne flowed to celebrate the occasion amidst informal chatting and mirth. ACEL360 accomplished a major milestone in the successful completion of its first 4-monthGovConAccelerator Program.

About ACEL 360: ACEL360 is a business accelerator based in Reston, Virginia that speeds the growth and builds the enterprise value of firms doing business with the Federal government. ACEL 360 employs world-class business development strategies to leverage strong partner ecosystems based on market opportunities and dynamics.